Newsletter Issue 31: Q&A on The contribution of AccuBoost for patients with pacemakers 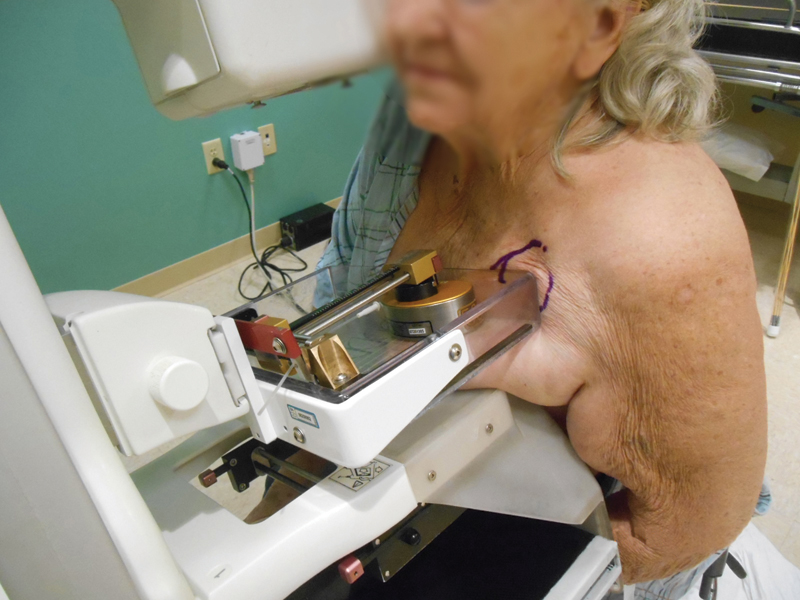 The tattoo on the patient marks the location of the pacemaker while treated along the C–C axis with AccuBoost. The pair of opposing tungsten applicators provide considerable shielding. Photo courtesy of CFCI

Patients with pacemakers present a challenge for radiation therapy. The problem is exacerbated for breast cancer patients as the pacemaker is often in or near the radiation field. The contribution and suitability of AccuBoost for this group of patients, as part of the continuing best industry practices, is posed to David Wazer:

Q: Should one be concerned when treating a patient with pacemakers?

A: Radiation therapy patients with pacemakers deserve special attention and it’s wise to err on the side of caution when treating these patients. As such, we always communicate our plan for radiation therapy to the patient’s cardiologist and work directly with them to ensure that the patient is safely managed.

Q: Are there clearly defined specifications for  safe/acceptable dose to the pacemakers?

A: The safe dose to pacemakers varies widely with different manufacturers. Generally speaking, most modern pacemakers can safely operate as long as the dose is below 50 cGy. However, it is important to clarify the threshold dose for each specific device prior to the start of treatment. That said, we routinely coordinate the radiation therapy plan with a cardiologist. Oftentimes, the pacemaker is interrogated after each fraction to verify that it is still in proper working order. For certain high risk cases, the cardiologist (or his designate) will be present in the department during each fraction – to intervene if a malfunction occurs.

Q: How does the pacemaker dose for AccuBoost patients compare with those designated to receive external beam?

A: To my knowledge, the dose received to pacemakers with AccuBoost procedure is exceedingly low according to the measurements that we have performed and certainly a lot lower than a typical XBT exposure. As a cautionary step – just to be absolutely safe – we place a TLD over the pacemaker to monitor and record the dose